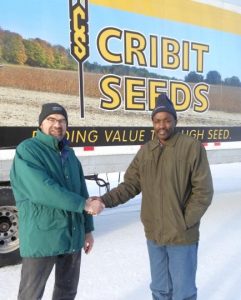 Quentin’s passion for collaborative decision making started when he was nine years old, while attending his first ‘board’ meeting, as a shareholder of his family farm. Since then he has served on a dozen boards, including ten years, four as chair, of SeCan, a national association of 650 seed growers and processors. He has also served on the board of Waterloo based, Heartland Farm Mutual insurance company, for over a decade. Starting in 2021 he is on the founding board of Seeds Canada, formed from the amalgamation of four national seed organizations.

Quentin and four family members own and manage Wintermar Grains and Cribit Seeds on their farm ten minutes north of Waterloo. The farm operations include growing and processing of pedigreed seed, and roasted whole grains, while employing fifteen staff.

Quentin and his wife Jean, a retired teacher who serves on the KKFC education committee, have four grown daughters. Jean and Quentin have both served in leadership roles at Calvary United Church St. Jacobs.