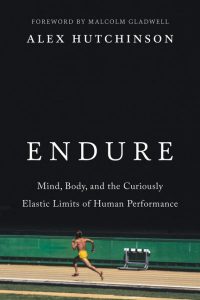 Alex Hutchinson is a well known for his focus on the science of endurance and fitness. He is a contributing editor to “Outside” (Sweat Science column). Alex also writes for The Globe and Mail (Jockology column) and Canadian Running magazine. He is the author of a practical guide to the science of fitness, called Which Comes First, Cardio or Weights? Fitness Myths, Training Truths, and Other Surprising Discoveries from the Science of Exercise, (published in 2011).  His latest book, ENDURE: Mind, Body, and the Curiously Elastic Limits of Human Performance, published in February 2018, explores the science and mysteries of human endurance.

Alex studied physics, earned a Ph.D. from the University of Cambridge and worked on quantum computing and nanomechanics. During that time he competed as a middle and long-distance runner for the Canadian national team. He still runs most days, enjoying the rigors of hard training, and entering the occasional race.